Don't see what you're looking for? Email us at sales@ashcoint.com 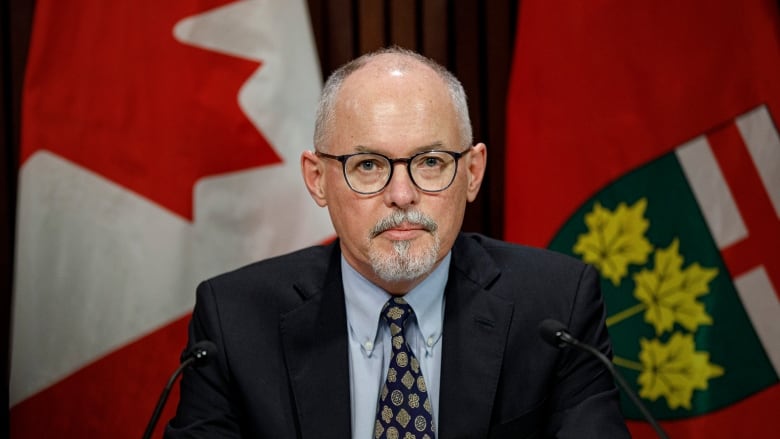 Medical Officer of Health Dr. Kieran Moore has previously said this fall and winter would see a resurgence of respiratory illnesses and he would recommend masking in certain indoor settings if hospitals began cancelling surgeries to deal with a surge of patients. (Evan Mitsui/CBC)

Ontario's chief medical officer of health is "strongly recommending" that Ontarians wear masks in all indoor public settings, including in schools and in childcare settings, but stopped short of recommending a return to a mask mandate in the province.

At a news conference on Monday, Dr. Kieran Moore said the province's health system is facing "extraordinary pressures" with the ongoing circulation of COVID-19, the earlier than normal rise in Respiratory Syncytial Virus (RSV), as well as influenza.

"What we are facing is a triple threat that requires our collective action and action to protect the most vulnerable in our communities, the very young, the very old and those with underlying medical issues and to ensure that our healthcare system remains able to care for Ontarians when they need it," Moore said.

Moore said Ontarians need to get back to using all the layers of protection that have proven to work over the course of the pandemic.

"We should all be screening daily for signs of illness and stay home when you are sick," he said.

"I'm asking Ontarians, especially children six months of age and older, pregnant individuals, families and caregivers with young children, health-care workers and elderly, and those with underlying health conditions to get your flu shot as soon as possible, [to] protect themselves and those around them," Moore added.

The recommendation to mask up comes as pediatric hospitals across Ontario have been dealing with an unprecedented surge of sick children in recent weeks.

Moore said children aged two to five should only wear a mask with supervision if they can safely tolerate masking, and can put it on and take it off.

Moore has previously said this fall and winter would see a resurgence of respiratory illnesses and that he would recommend masking in certain indoor settings if hospitals began cancelling surgeries to deal with a surge of patients.

"The difficult and complex fall that was predicted has materialized," Moore said Monday.

"COVID-19, influenza and RSV — all three are actively circulating across Ontario in all of our communities … contributing to the pressures on our pediatric health-care system."

Medical officials have also been increasingly calling for the public to mask up after children's hospitals across the province became overwhelmed with young patients in emergency departments, pediatric wards and intensive care units.

On Friday the Hospital for Sick Children in Toronto announced it would be ramping down surgeries to redeploy staff to those areas.

SickKids chief executive officer Dr. Ronald Cohn said the cancellation of surgeries is a big blow to children, their families and health-care workers.

"It is heartbreaking for the families and the children because, you know, the term 'elective surgery' doesn't really exist in children," Cohn told CBC Toronto, adding it's about finding the right time to schedule and perform the surgery.

"It's also incredibly morally distressing for all of us as health-care professionals, recognizing that we actually cannot do these procedures for the children, knowing that they need them," said Cohn.

Dr. Chris Simpson, executive vice-president, medical, at Ontario Health, also spoke at Monday's news conference. He said that "unusually high numbers of children are coming into hospital emergency departments" for one or more viral illnesses, and the total number of these children that require admission is "uncommonly high."

Simpson said while Ontario hospitals have been preparing for "this triple threat," they are seeing high numbers of seriously ill children and seeing them earlier in the season than had been expected.

"Although this current situation is unlike anything we've seen in the pediatric population in recent memory, we have strong systems and structures that have been put in place during the pandemic for our adult community," Simpson said.

Meanwhile, speaking at a news conference on Sunday, an unrelated issue, Premier Doug Ford urged members of the public to get their flu shots and be up to date on the COVID-19 vaccinations.

Ford did not answer repeated questions Sunday about whether his government would be mandating masks in any settings.

"I'm going to follow Dr. Moore's direction," Ford said, a line he repeated several times when pressed on the issue.